Ever since doing the Pura Pura, I’ve been looking out for something that’d take my crack climbing in a slightly new direction. Whilst the Pura Pura was hard, Century Crack was gruelling and Cobra was painful, none have truly powerful, all-out 100% moves. I suppose that’s the nature of power endurance climbing, but it’s a factor that I’ve been very aware of in the recent years. And this is due to one thing: I know routes like Century, Recovery Drink etc are just the start. This game has got a whole lot further to go. 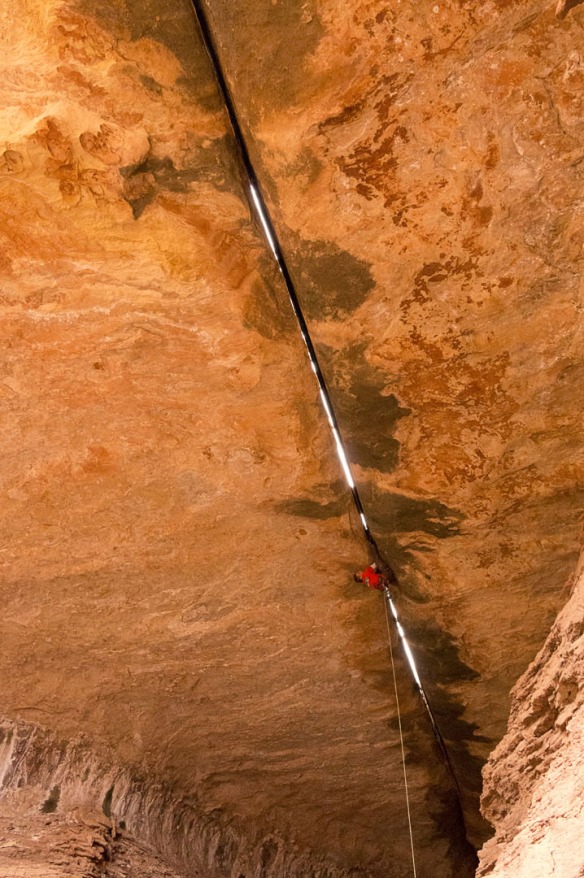 Where do you go when you’re puffing out of your ass on a V10 though? More stamina? Build another cellar crack? Work on your pinkie jamming? I think the answer for me lay in trying to find or climb a much (much) more powerful crack. No endurance factor, less cheater-beta and with plenty of power needed. Both Pete and I have talked about this being the limiting factor in what we’re doing presently and we know that you’re unlikely to be climbing much above 8c if you’re a stamina weakling.

Quite a few years back we both ended up in Devon on a tip off from Stu Littlefair about a mega roof crack. We got psyched and drove down south to get stuck in. Unfortunately, it rained and rained and rained. That wasn’t the issue though… it basically turned out that it was way too hard! A massive horizontal roof crack at Hartland Quay that featured 20ft of pods and pockets into another 20ft of thin hands and monos with a tricky lip turn at the end. Suffice to say we got shut down and decided that it was easier to go and climb Greenspit and All Elements / One Infinity.

As Pete is off training most of this summer for his Yosemite trip, I found myself getting motivated again for some Devon action. I knew in the back of my mind that I should just commit to something that I wasn’t sure was possible as then I’d find out how far I could push my power. Most of the time, I look for the sub-max moves as you know that anything above that and you’ll never hang around for more than about 60 secs. Going back for the first session back on the project this year I was reassured that everything about it was hard. The singular moves came to together ok, but trying to link and maintain core tension whilst spinning around in the roof was desperate. All of this had to be done with little error so that I had a chance on the crux mono move. 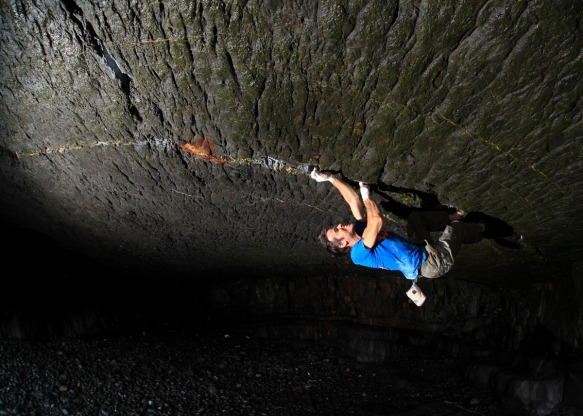 First of the tricky moves…

Compared with the mono on Cobra, you’re in a whole different world. No longer is it a single set up undercut mono on a 35 degree bulge. It’s long horizontal span to a back-hander mono, followed by a 270 degree spin through and hard move to a thin hands jam (which is immediately followed by a really gnarly ring-lock move). When I first tried this move I was convinced that my forearm or finger would explode with a loud “bang” if I even tried to put 75% of my weight on it. Thinking about doing the full spin on a single bad foothold seemed very unlikely! As I’ve always done though, I broke it down, learned how to pull harder on monos and introduced my forearm to the idea that it wanted to stay in one piece. Bit by painful bit, it came together over the summer. 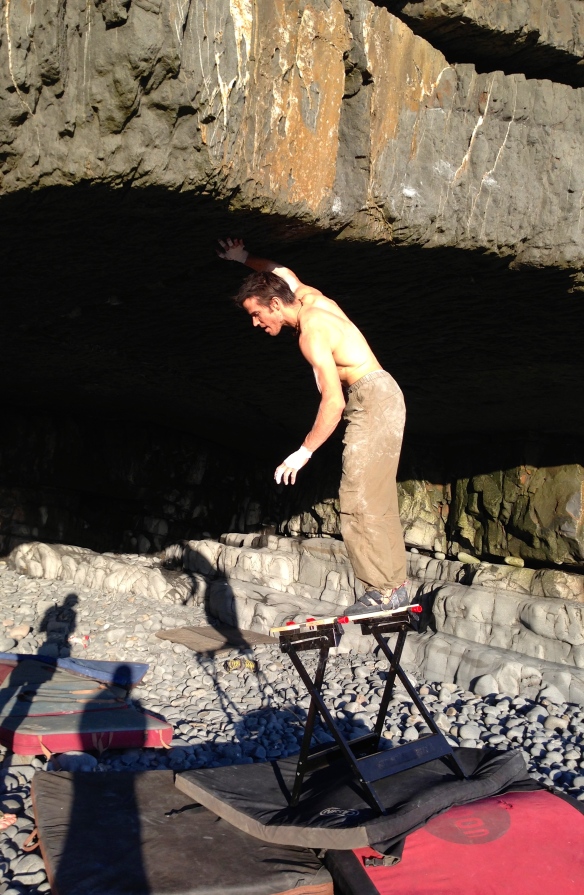 Last weekend, was around my 10th day on the project and also marks around 10 years of crack obsession. As I warmed up on the roof, I was really aware that the weekend before I’d done the roof in two halves and so the pressure was on. I’d spent of week of obsessing about every possible advantage I could give myself and as I put my best boots on I thoughts of the positives. Just before pulling on though, I caught myself making a rookie error – I was about to gauge how I was feeling for the day with every possible factor in my favour. If I had subsequent doubts, how would I rest my mind?! With that, I took off my favourite shoes and put on my worn out pinkies.

With local man Gavin Atkins occasionally acting as a soundboard, I spent the next hour or so making a bit of a hash of the warm up, the lame excuses and the project as a whole. My sequences suddenly felt a bit off and my feet weren’t sticking on the holds. I knew that I’d started the usual process of getting too attached to the goal and letting expectation bring down my performance. For that I had my little trick! I slipped off my old pinkies (which in reality are perfectly functioning!) and strapped into a perfect pair of velcros. My one last psychological advantage.

Setting off with an unusually low expectation on the outcome, I found myself climbing reasonably well. 20ft in and reaching a long way into the mono I shut out all the thoughts of what could go wrong when I cut loose and grunted my way into a dark place in my mind. As my forearm increasingly screamed at me, I kept the pace and urged my feet forward ahead of me.

Just a couple more seconds on this “f-ing” hold! Cummon… I felt every sinew straining and waited for my inevitable season-destroying injury. It never quite came and I had the thin hands jam placed and ready to release the mono. As I spun through and eye-balled the ring-lock move my body sagged a little and realised I’d blow it. Not enough in the tank. Bollocks! Gav below me shouted and I made a vain lunge at the one-inch slot ahead knowing I was off. As I dropped towards the shingle beach my fingers locked in the position I’ve done a million times before and suddenly it was game on…. on a bloomin’ ring lock!

As with many “at limit performances”, the last bit drifted by in a bit of a daze and I dug deeper than I have in some time. I’m not sure the moves were that hard, but I was drained and my body was complaining. Right at the lip I nearly hashed the whole thing up as I kicked my own hand off a crimp by heel hooking on top of it. A resulted bodge job sequence was cobbled together for a few V5 moves at the end. I’m glad that wasn’t the crux! As I dropped off the finishing jugs and onto a pile of mats, I felt utterly beasted. It seemed appropriate that I named the Hartland Roof as “The Kraken” after a mythical monster of the deep that most of us hope we never have to wrestle with. That’ll be any form of crack climbing for most people then 😉

First ascents are always hard to grade and I’ve waited a couple of days to think through my logic. In terms of any crack climbing I’ve done it’s in a very different place on the difficultly scale and even if you take something like All Elements at V11 or Sasquatch at V11 it’s nothing like them. Whilst I’m not the most experienced “regular” boulderer in the world, I think I’ve got reasonable reference points from the strange world of crack climbing. For me V13 seems to fit the bill, but time will tell. Whatever happens, I know this is an important step in the direction of where myself and Pete want to go with our next big trad mission…