At the moment I’m splitting my climbing time 50:50 for two reasons. One is that I’ve injured myself so I can’t go outside climbing all the time and the other is because I’ve learnt that long term projecting makes you extremely unfit in your other areas of climbing. Some of the best things that I’ve ticked over the years have immediately followed with a realisation that my grade in another style away from the project has dropped 1,2,3 or more grades!

As I’m wanting to clear up a load of the projects in the UK that I’ve had in the back of my mind for a few years I’ve thought it would be more stimulating to travel around a bit and get quick 1-5 day ticks on things that are of varying styles and don’t hurt my finger (or at least I can drop the finger and go without). As I’ve committed in my mind to 20+ days on the Devon roof project, I need to keep the mileage a little higher that usual as basically each projecting session is a high intensity boulder/pad hitting session. I fall off a lot more than I hang on! 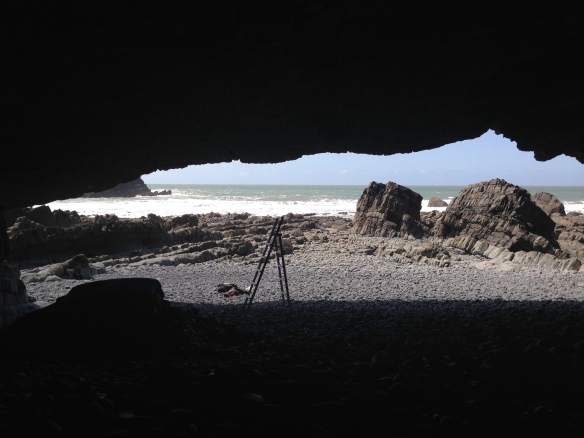 One big roof. One big project

First up, I headed to the North York Moors to see if Franco Cooksoon is as mad as they say he is and whether he’s talking absolute nonsense about the UK’s best lines being up there. Well, I’m not sure about the superlative quality yet, but…… it is pretty flipping good! I spent a day exploring High Crag and came away with the first ascent of “The Art of Non-Conformity” E7 6c which had lured me in with the project title of “Australia Crack”. I can’t resist a crack! I soloed it without pads, but I suspect that if you had 4-6 pads and a tied down belayer you could make it a very reasonable highball.

The week after I got midged to hell and realised that limestone was my only option, which lead to a final lead of the Eye of the Tiger Direct project at Ilam Rock. I tried this ground up, placing all gear on lead quite a few times last year but kept on falling at the top. In the end, my greed got the better of me and abseil inspection reduced the line to a more reasonable feeling 7c+, although placing the gear still makes it feel like the most desperate 8a ever! Especially when I couldn’t find the crucial placements at the top. I did shout “Punter!” at the top of my voice at myself a few times. I’d imagine it’s one of the harder limestone trad routes around at the moment and “Thrill of the Fight” E7 6c will reward most people with a pretty enjoyable forearm pump.

Finally last week, I snuck off to France (whilst the weather wasn’t looking) to explore a tip off I’d had from a friend about some hardcore limestone cracks in Sisteron. To warm up I scraped an onsight of an amenable looking 7c finger crack. To say I was nearly falling off quite a few moves was an understatement. I realised we were not going to get rewarded with soft grades in this old-school venue. Damn it! I did get some self (crack) respect back when I found it’s often claimed at 8a and that Britain’s strongest one-arming lawyer Ru Davies even thought it tricky for the grade. All my other friends gave me none of that though and told me if I couldn’t climb Spanish 7c then clearly this was 7b. At max.

For the next few days I ploughed some effort in an 8b finger crack called “Presence” with my partner Lucas Iribarren. As usual, he was psyched out of his mind and provided constant amusement as we flailed around on the early sessions. On the first couple of days I was left with the impression that the route was very similar to the middle hard section of Cobra Crack but without the V9 crux undercut part. What it lacked in crux beef, it definitely made up for in sustained nature. It was hard from metre “one” to metre “twenty five” and only let up a tiny bit in the last eight metres.

What also added to the difficulty on this route was some very spicy bolting. Both of the 3rd and 4th clips would result in deck out from 30 and 50ft if you fell off level with the bolt. Fortunately the risk had to only be taken on the initial working day as we got some decent long rope draws to make it more 8b than E9. After a few days of working the moves I had just one day to make an optimistic redpoint and made sure I got up at dawn to get the temps lower. It wasn’t the greatest start in my history because I stayed up late drinking coffee and watching climbing films and then couldn’t get to sleep until 4am as I was absolutely psyched out of my mind. The new simple formula for lesser success is Caffeine + climbing vids + project next day = no sleep! Fortunately early bird strategy paid off this time and I chicken winged my way through the top crux much the crack’s surprise. As a crack, I think it’s absolutely superb and fits in nicely at the 8b/+ (or 5.13d/5.14a) mark on a global scale. My obsessive nature was of course mainly pleased that I’d managed to tick another one off the life time list.